College of Business and Management 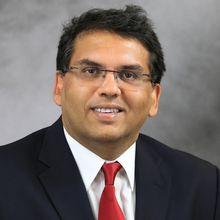 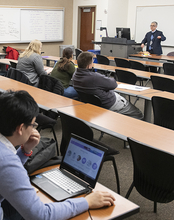 The College of Business and Management (CBM) at the University of Illinois Springfield has been reaccredited by the prestigious Association to Advance Collegiate Schools of Business (AACSB). 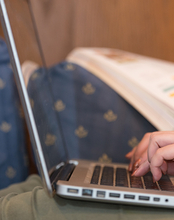 The University of Illinois Springfield has a long history of excellence in online learning. UIS is proud to add four new, 100% online, accelerated graduate programs to the 52 graduate and undergraduate programs offered.

By adding new graduate business degrees online, UIS is designing its portfolio to help a variety of potential students, the vast majority of which will be working adults.

Garrett Nimmo enjoys being a voice for his fellow students. He was recently elected president of the University of Illinois Springfield Student Government Association (SGA) in a campus-wide race. As SGA president, Nimmo meets with university leaders to express student positions on important issues. He was first elected to the SGA as a senator-at-large his freshman year. Nimmo is also a mentor for Leadership for Life, a service and leadership program where students complete 40 hours of service each semester.

Melissa Van is getting a jumpstart on her future career at the University of Illinois Springfield where she helps promote student events on campus as the marketing chair for the Student Activities Committee and the Asian Student Organization. “I make flyers, distribute flyers, do word of mouth and social media advertising,” she said. Van is also the vice president of the UIS Community Garden Club and a Capital Scholars Honors Program peer mentor.

Abbie Varble loves to give back to her community. At UIS, Varble is co-president of the Habitat for Humanity Club, a resident assistant and member of the Leadership for Life Service Program. She is also a peer mentor for the Capital Scholars Honors Program, a member of the Christian Student Fellowship and plays in the UIS Concert Band. Varble says she chose UIS because she loved the environment and it felt like home. Following graduation from UIS, she would like to become an accountant or executive director of a non-profit organization.

As president of the Student Activities Committee (SAC), Ahja Howard is responsible for planning two of the biggest and longest-running student life events at the University of Illinois Springfield each year. Planning UIS Homecoming and Springfest, a week-long competition where students face off in fun and educational games, is almost a full-time job for Howard. She also spends her time mentoring elementary school students in Springfield as a volunteer for the 4-H Mentoring Program.

Congratulations to Prof. Shipra Gupta, the first recipient of the College of Business and Management’s Faculty Scholar Award for the 2019-2020 Academic Year!