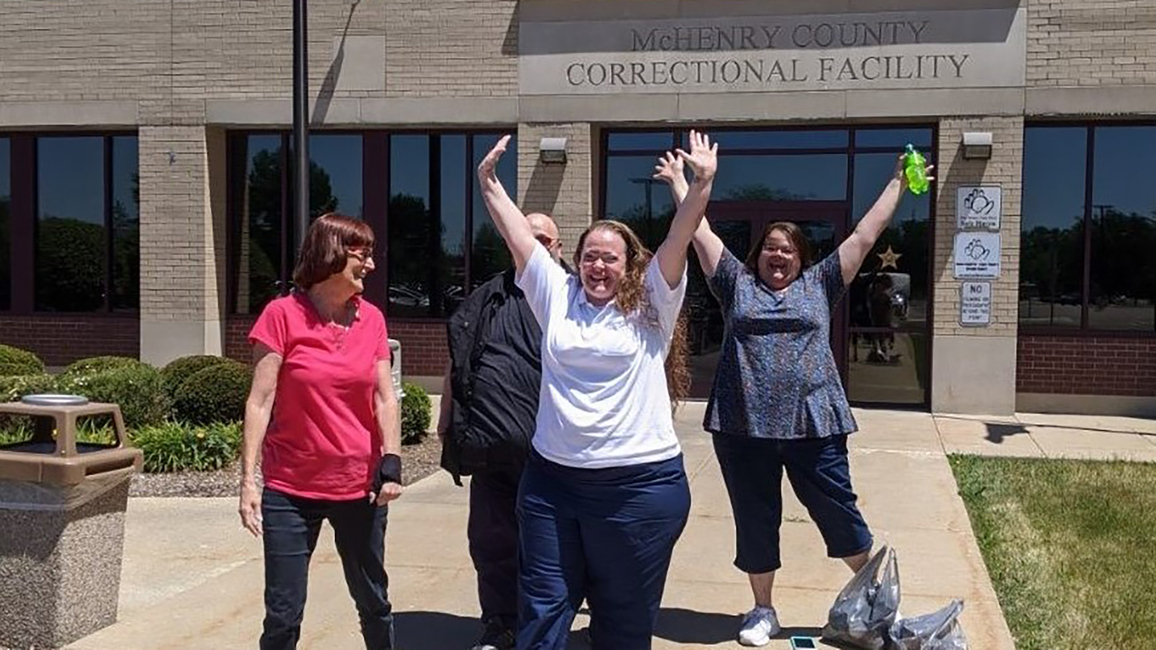 The Illinois Innocence Project (IIP) at the University of Illinois Springfield is pleased to announce its client Jennifer McMullan has been released after more than 19 years of wrongful imprisonment for a murder she did not commit. At a court hearing on Wednesday, June 16,at the McHenry County Courthouse, the State vacated McMullan’s murder conviction and sentence, and presented a plea agreement that would release McMullan that day with her sentence considered “time served.”

“Jennifer has long maintained she is innocent of this crime, and the Illinois Innocence Project knows and believes her to be innocent,” said Stephanie Kamel, one of McMullan’s attorneys at IIP. “To be released, she faced an extremely difficult decision – accept a plea to a lesser charge or remain wrongfully imprisoned for years to come. Driving her decision was her father, whose health is deteriorating rapidly due to Alzheimer’s disease.

“While we would like to have seen Jennifer’s conviction vacated, we are glad she is finally free and reunited with her family after an almost 20-year absence.”

In March 2001, two masked men attempted to rob a small restaurant in McHenry, Illinois. The owner, wielding a butcher knife, and his employee chased the men out of the restaurant and in the ensuing chase the owner was shot and killed. McMullan was wrongfully convicted of being the getaway driver.

McMullan, just 19 at the time, was intimidated and coerced into providing a false confession after nearly 15 hours of interrogation by multiple male law enforcement officers. She had no parent or legal representation present.

At McMullan’s trial, law enforcement withheld extensive and credible evidence implicating an alternate suspect group, never divulging the existence of the group. The alternate suspect group repeatedly confessed to committing the crime, providing to family, friends and two different police departments critical facts about the crime only the perpetrators would know.

McMullan ultimately was wrongfully convicted of first-degree murder and attempt armed robbery under the “theory of accountability” – where a person can be found guilty of acts committed by others. Despite having no prior criminal record, McMullan was sentenced harshly to 27 years in prison.

No physical evidence ever connected McMullan or her three co-defendants to the crime. Multiple rounds of DNA testing (even as recently as 2020) have excluded McMullan and her co-defendants from handling any key pieces of evidence located at the bloody crime scene.

Over the course of three separate trials, the State prosecuted and convicted Kenneth Smith, one of McMullan’s co-defendants, as the actual shooter. Recently the Seventh Circuit Court of Appeals found the trial evidence failed to support his conviction beyond a reasonable doubt. Smith’s conviction was vacated and he was released from prison on May 7, 2021.

False confessions have played a role in the wrongful conviction of 101 individuals in Illinois – 31 of whom were under age 18. Recent studies suggest young people are two to three times more likely than adults to confess to crimes they did not commit.

“False confessions are a significant cause of wrongful convictions,” said Maria de Arteaga, another one of McMullan’s attorneys at IIP. “Jennifer, at a young and vulnerable age, was pressured into giving an unreliable confession that led to her conviction.”

While wrongfully imprisoned, McMullan demonstrated a commitment to continuous self-improvement by furthering her education at every opportunity, pursuing an associate’s degree and securing multiple professional certifications. She was one of three inmates chosen to train golden retrievers as therapy comfort dogs for disaster victims.

McMullan is the 20th client of the Illinois Innocence Project (which notes its 20th anniversary in 2021) to be released or exonerated.

The Illinois Innocence Project, formed in 2001 at the University of Illinois Springfield, provides pro bono legal advocacy and guidance to those who have been wrongfully convicted in Illinois but have credible claims of actual innocence; educates students and the public about criminal justice system failures that lead to wrongful convictions; and works with policymakers and law enforcement to change rules, laws and practices to minimize wrongful convictions. The Project has helped exonerate or release 20 individuals wrongfully convicted in Illinois.