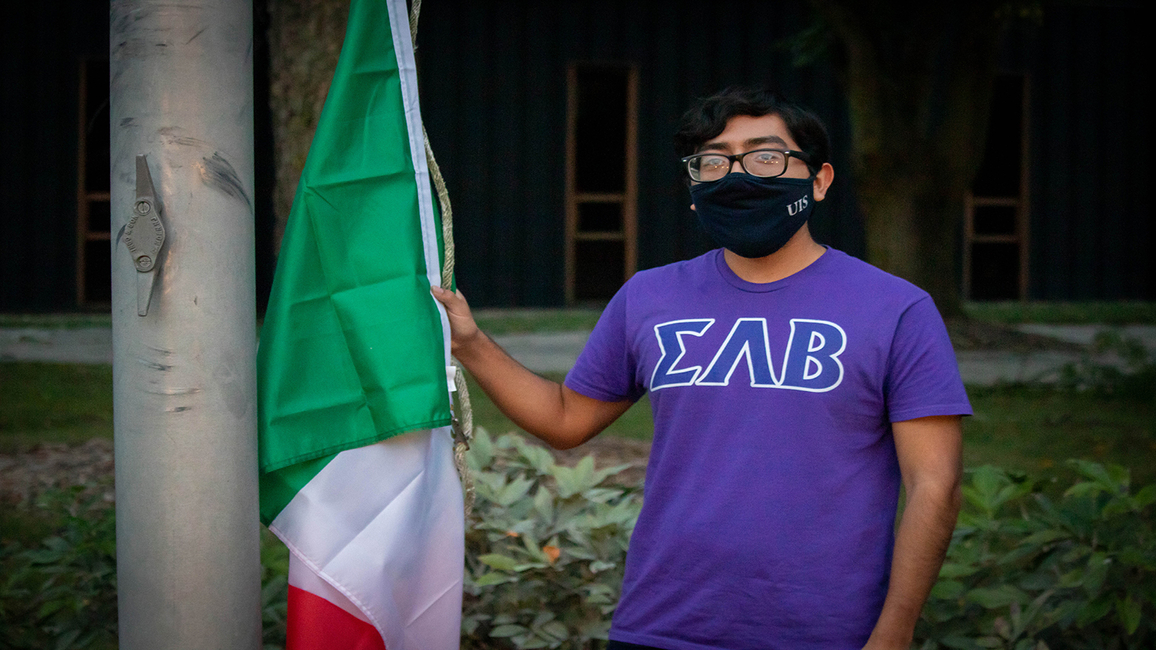 Edgar Gasca came to UIS because he knew he would be known by his name, not a number.

The small campus community was ideal for the first-generation college student. He is studying counseling psychology with hopes of becoming a mental health counselor or a therapist.

He knows reaching his goal will be easier thanks to the scholarships he has received. The generosity of others has allowed him to focus on his studies and involvement at the Diversity Center.

“I’m very grateful,” he said of receiving scholarships. “They gave me the opportunity and the support to continue my education.”

Many students can only access a higher education with some assistance: Nearly 70 percent of UIS students receive financial aid of some sort, whether it be through scholarships, grants, loans, or student employment. It is the only way they can afford college without taking on crippling loans or working to the point where they miss out on some of the benefits of college.

Hundreds of students already annually receive private scholarships from UIS. But the desire to create easier access for more students is why Scholarships is the first priority for Reaching Stellar: The Campaign for the University of Illinois Springfield. The campaign, which hit its $40 million overall goal in August, continues until June 2022 as it raises funds to enhance the excellent opportunities the University offers its students, faculty, staff and larger Springfield-area community.

Since Reaching Stellar kicked off, nearly $8 million has been committed to 72 new scholarship funds. As of the fall 2021 semester, more than 250 additional students had benefited from those funds so far – and many more will in the future.

Diana Ibarra, a senior majoring in political science and legal studies, is one of those students. She has received the Lawrence E. Williams, Dr. Larry Golden Illinois Innocence Project Scholarship for two years. She said the scholarship, established by Wilverlyn Joye (Williams) Morris, has allowed her to focus on her studies and her work with the Illinois Innocence Project, where she works as a Spanish translator and helps track criminal justice related legislation in the Illinois General Assembly.

“I would say thank you, and that I really, really appreciate it,” she said when asked what she would tell Morris about being on the receiving end of a scholarship. “Being a college student itself is already very hectic. It has helped me connect with the IIP. I didn’t have to worry as much because some of my expenses were covered by the scholarship.”

Jason Jensen is also grateful for the scholarships he has received. He lives in Berwyn and is earning his online degree in education with plans to become a teacher,

At age 50, he realized he had knowledge and experience he wanted to share, and a desire to help. He and his wife were becoming increasingly involved in their children’s schools and he decided to get really involved in education by becoming a teacher.

He found UIS’ online teacher certification program was enjoyable, affordable and flexible enough to do in-between his parenting and work duties. Still, financial aid made it possible to continue his studies during the pandemic.

The pandemic shut down his employer for a while, and once it opened up business wasn’t as brisk as it had been in the past and he hasn’t been able to work as many hours as he has in the past.

“Any bit that you can get helps,” he said, noting without a scholarship he would have to get a larger student loan.

“I’m very grateful,” Jensen said of his donor. “I’d like to think that I would be able to establish a scholarship too someday. If you have enough money, that’s the thing to do. Help other people get there, help them out of their situation.”

Scholarships can be created by the donor and be endowed, which means a scholarship will be provided annually for the foreseeable future once $25,000 is committed to the fund. Or a donor can establish a current use fund, which can be funded for a year at a time for $1,000 each year.

To learn more about establishing a scholarship, visit uis.edu/give/scholarship-giving or call the Division of Advancement at 217-206-6058.