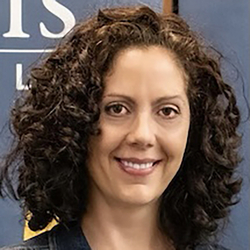 Deborah Anthony has been with the Legal Studies department since 2006. She is serving as Chair of the department and Director of the UIS Pre-Law Center. She holds a B.S. in Philosophy from the University of Utah; an M.A. in Government from the University of Texas at Austin; and a J.D. from Georgetown University. She previously practiced law serving indigent individuals, where she specialized in family law, domestic violence, civil rights, and housing law, including public and subsidized housing. She currently teaches in the areas of constitutional law, philosophy of law, poverty law, family law, employment discrimination, and public advocacy. She conducts research in modern and historical gender law, constitutional law, family law, employment discrimination, and the legality of the current practices of the U.S. Border Patrol. She has published articles on the Americans with Disabilities Act, the Family and Medical Leave Act, employment discrimination under Title VII, parental leave policies at colleges and universities, and sex- and gender-based rights in family law. She has also published work investigating the historical development of women’s legal and political status, revealing the increasing constriction of women’s rights over time in English legal history, the impact of those developments on U.S. law and tradition, and the ways in which political memory operates to manipulate public conceptions of historical events in ways that shape concepts of personal and national identity and directions in public policy. Recent publications have analyzed the constitutionality of U.S. Border Patrol actions, particularly with respect to Fourth Amendment search and seizure provisions, and the disparate prosecution of mothers when another parent harms their children.

Professor Anthony has worked with Project Corazon representing asylum seekers left homeless in Mexico under Migrant Protection Protocol program. She has spent time at the South Texas Family Residential Center working with Proyecto Dilley representing detained asylum seekers. She has also worked with the Center for Human Rights and Constitutional Law visiting multiple Border Patrol detention facilities along the Texas border to monitor compliance with requirements for the humanitarian treatment of children under the Flores settlement.