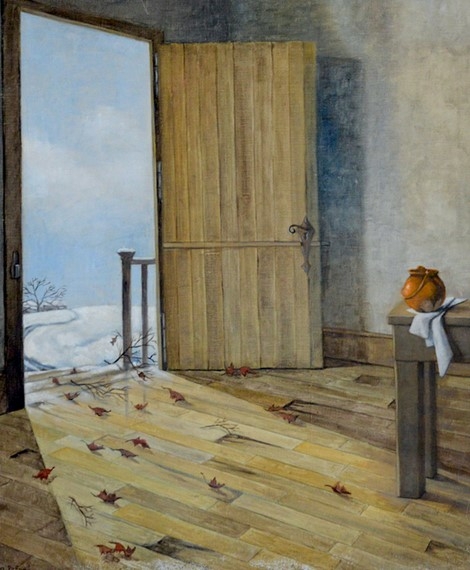 Besides the 12 million Ukrainians who have fled their country due to the current war, there is also a mass exodus of Russian intellectuals, artists, and other citizens leaving Russia. Trauma related to exile figures prominently in Alexandra Pregel’s art. Pregel lost two countries that were dear to her heart. These losses played a vital role in her development as a person and an artist.

Exile is a traumatic experience, a departure from one’s homeland by necessity or force. The artists who undergo exile use their art almost as therapy and as a way of sharing with the world the meaning of trauma related to exile. In part, they are driven by a necessity to express a painful lived experience and how their inner world is affected by it; they are also driven by their need to share and make the viewers and readers aware of traumatic human experiences in general and exiles in particular.

In North America and the United States, people are used to moving around a great deal. Nonetheless, most people stay within their own culture and language and move mainly by choice. Even those domestic moves impact people’s personalities, mentality, and culture they live in.

However, for older cultures, such as European, Asian, or Russian cultures, moves to foreign cultures are often dramatic, especially when driven by political forces that push people out of their homeland.  At the same time, exiles must contend with settling and surviving in a foreign culture where they must learn how to function in the midst of discomfort and alienation, a different way of thinking, a new lifestyle, language, and landscape—all in the absence of the necessary human network usually established for generations in their own homeland.

Artists whose sensibility is highly sharpened live the trauma of exile painfully and intensely, and that painful experience is transformed into a powerful scream in their works that troubles a well-established bourgeois and becomes a reminder of the cruelty and drama of human history and warning for humanity.

Under a different name, Pregel and her family had to escape Russia when she was 11 years old. Her father, Nikolai Avksentiev, was one of the ministers of the newly formed Kerensky’s provisional government after Russia’s 1917 February Revolution. Once Bolsheviks seized the power in November 1917, they hunted not only those who were in the previous governments (monarch and republicans) but also searched for their families and anybody who was related to them by blood or friendship in order first to imprison and then to destroy them. The only child of Avksentiev, Alexandra, was in high demand after her father was imprisoned by the newly formed Soviet government.

Her second exile occurred when she was 32 years old, a few days before the Nazis entered Paris on June 14, 1940. She was forced to leave France, which had become her adopted country, and Paris, the city where she grew up, studied, exhibited her art, and had a beautiful home.

When she fled Paris, she left over 300 pieces of artwork, which were confiscated by the Nazis. Some of this stolen art currently resides in German homes. Some of it was destroyed as retribution for not finding and gassing the artist herself. She and her husband escaped the city on June 10, 1940, and ended up in New York on July 29 of the same year.

The shocks of her double exile and the war, along with their losses, deeply penetrated the artist’s soul. Those losses are indelibly imprinted within her post-war art.

Her Surrealist painting Dead Leaves is an expression of a drama of her life associated with her double exile. This painting is a metaphor for emigration and exile. Here the interior of the house almost abandoned is taken over by the coldness and the discomfort of the exterior world. The interior still has some reminders of the past, such as the teapot posed on the napkin, but at the same time, it represents the world that disappears and decomposes itself. The outside world imposes itself through the open door destroying the inside. It brings with it the memento mori, the reminder of death, embodied in dead and dry leaves that come inside the house pushed by the breath of the cold outside wind. The open door plays a role of the vehicle and of the mirror which means both the intrusion and the abonnement.

This painting is a powerful expression of the dramatic experiences of exile, the symbol of the intrusion of the exterior events in one’s personal interior space, and the destruction by the exterior of the points of reference of one’s inner life. Pregel’s life and her exile forced the loss of daily objects that surrounded her. Adapting to her new exterior life and to the foreign culture required a great deal of tenacity so that she could at the same time preserve herself and her identity, so important for an artist. My goal in studying art history is to reacquaint the public with the cultural contributions of outstanding artists, writers, and musicians. I am very interested in women artists and writers because many of them were left aside by time and events. Alexandra Pregel is one of these highly skilled and original “forgotten” artists who have contributed significantly to world culture and can serve as inspiration for other artists who use the trauma of their lives and their exile to create powerful and unique artworks.