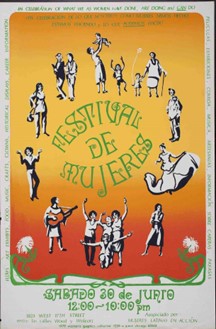 How did Latinas empower themselves, their families and communities in 1970s Chicago? We explore this through the 1979 Festival de Mujeres, a street fair in Chicago’s Pilsen neighborhood, the cultural and activist heart of the Mexican Midwest. The Festival was organized by Pilsen’s Mujeres Latinas en Acción, an important, early Latina women’s organization. It was intergenerational, connected with Puertoriqueña, Anglo, and Black feminists, engaged with health, labor, and arts groups, and included the seeds of lesbian visibility and alliances. We address the challenges of conducting this historical research and introduce our digital exhibit on the Festival. The exhibit is part of the Chicago Monuments Project, which “develop[s] a framework for marking public space that elevates new ways to memorialize Chicago’s history more equitably and accurately”(https://chicagomonuments.org).

Diana Solís, a Pilsen-based teaching artist who was on staff at MLEA in 1979 and helped organize the Festival, is featured on the panel.  A visual artist, photographer, and educator from Chicago’s Pilsen neighborhood, Solís is inspired by Mexican and Chicano culture, memory, oral and personal histories, and queer identities. With Dr. Hinda Seif and Laurie Matheson, she leads an effort to envision monuments to Pilsen’s Latina histories for the Chicago Monuments Project.

Sarita Hernández is a salvadoréxican teaching artist, oral historian, and print/zine-maker. Hernández is co-founder of marimacha monarca press, a queer and trans* people of color artist collective based in Chicago’s Southwest Side. Hernández works on the ARTivism workshop series at the University of Illinois Chicago’s Latino Cultural Center. They are interested in artistic interventions with the historical archive and imagining alternative forms of social documentation, preservation, and activation of everyday histories, survivals, and resistances.

Professor Hinda Seif, UIS Associate Professor in the Department of Sociology and Anthropology and faculty board member of University of Illinois Press, is writing a book on 20th Century social movements in Chicago and Mexico through the life and photographs of Diana Solís.