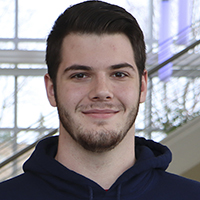 Zach Alwicker is the president of Phi Kappa Tau fraternity at the University of Illinois Springfield and works as a content editor for the UIS Office of Web Services. “I chose UIS because of the generous scholarships they offered compared to other schools in the area,” he said. “I love the housing at UIS. Having access to a townhouse during my second year has prepared me for life after school in a way that classes cannot.” Following graduation from UIS, he plans to work in software development.