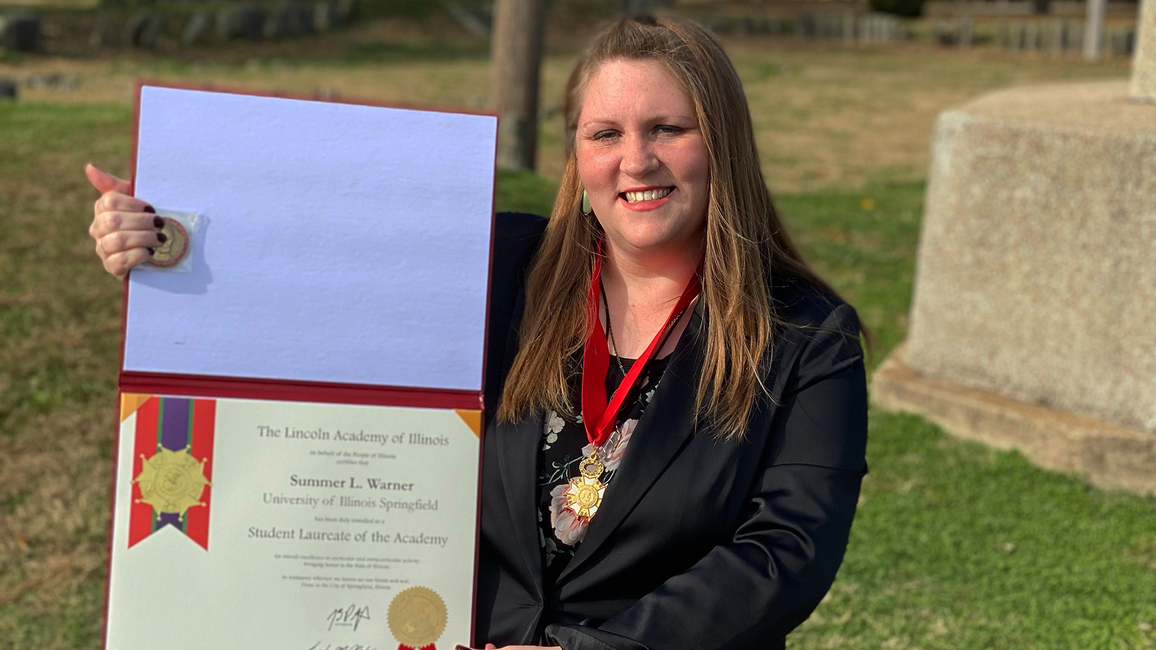 Summer Warner of Paducah, Kentucky has been selected as the University of Illinois Springfield (UIS) student recipient of the Student Laureate Award from the Lincoln Academy of Illinois. Only one UIS student is honored with the prestigious award each academic year.

“I'm incredibly honored and shocked to win such a respected award,” Warner said. “I'm a non-traditional student, and I sometimes find it hard to believe that I'm managing college, while also working and fostering three children under the age of two. It feels amazing to have all of my hard work be recognized and I am so grateful. I think it's a testament to the truth that it's never too late to finish your college education, even if you were a bit of a late bloomer like me.”

Warner is an online psychology major who is minoring in English at UIS. She is the prose editor of the Violet Margin, the UIS campus literary journal.

“I wanted to earn my degree at UIS, because it's one of the few universities that has completely online programs in both psychology and English. I was also aware of the university's strong reputation for excellence. It felt like the perfect fit,” she said.

Warner is a graduate of Lone Oak High School in Paducah. In high school, she participated in theatre and art, played the clarinet in band and won regional honors for her recitation of French poetry. She was also a member of the Key Club and the Biology Club. After high school, she graduated with honors from Shawnee College in Ullin, Illinois before transferring to UIS.

In 2018, she published a book of poetry, “Dancing to Songs About Death.” Her creative writing, journalism, and personal essays have appeared on various websites, including Medium, The Mighty and West Kentucky Star.

Following graduation from UIS in May 2022, she plans to become a genetic counselor and to continue writing professionally. Outside of pursuing her education, she and her wife are foster parents and she works at an elementary school as a substitute teacher and a reading intervention assistant.

“UIS is extremely online student friendly,” she said. “I feel like I've been able to be involved with the culture of the college while still being an online student. I've found UIS to be an inclusive community for students from all walks of life, which has been wonderful.”