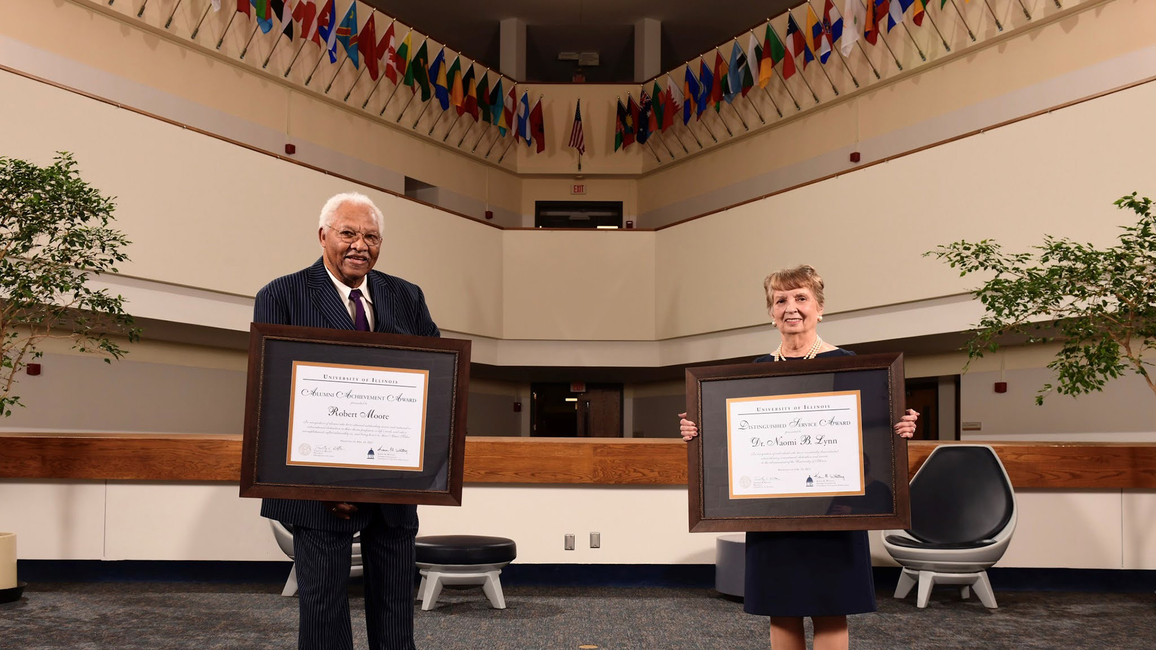 The University of Illinois Springfield presented awards for service and alumni achievement during the virtual 50th anniversary celebration held via Zoom webinar on Thursday, April 22, 2021.

The 2021 Distinguished Service Award for extraordinary commitment, dedication and service to the advancement of the University of Illinois was awarded to UIS Chancellor Emerita Naomi B. Lynn. The depth, consistency and continuum of Lynn’s leadership as a university administrator, trailblazer, community leader and volunteer has significantly impacted the welfare and advancement of the institutional mission. She is a champion of women’s rights, and leader and mentor for women and minorities in academia and the larger community.

“It was important to break barriers,” Lynn said. “I live for the day when no woman will have to be introduced as the first.”

Lynn skillfully led the transition of SSU to UIS, positioning the university for growth in enrollment, on-campus residential life, infrastructure, online education and international academic agreements. Lynn retired as Chancellor in 2001. At her retirement, the Naomi B. Lynn Distinguished Chair in Lincoln Studies was created at the university, with a $1.25 million gift from the family of Dr. Richard E. Vaden.

Lynn served as president or board member of several professional public administration, higher education and political science organizations. She is a past recipient of the U of I Loyalty Award for Exceptional Alumni Service. In 2012, Governor Pat Quinn presented Lynn with the Order of Lincoln, the state’s top honor.

The 2021 Alumni Achievement Award for outstanding success and national or international distinction in one’s business, profession or life’s work was presented to Robert Moore. Over a career spanning nearly 50 years, Moore has become a distinguished and nationally recognized leader in the practice of law enforcement, facilitator of community policing initiatives and historical research of African Americans in law enforcement.

With the Illinois State Police, Moore played a pivotal role in diversifying the state police force make-up to include significantly more minorities and females. He was later appointed by President Bill Clinton as U.S. Marshal for the central district of Illinois. Moore also served as deputy chief of police for Savannah, Georgia, and chief of police for Jackson, Mississippi.

A passion for documenting and presenting the history of African Americans in law enforcement led him to author and publish “The Presidents’ Men: Black United States Marshals in America.” That led to the development of a traveling exhibit on the topic that tours colleges and universities throughout the U.S., inspiring college students to careers in law enforcement and to see themselves as leaders.

“I don’t allow myself to get frustrated,” Moore said. “I can’t afford to get bogged down in what has not happened. I focus on what I have been able to do to bring things forward.”

For more information on the awards, contact Chuck Schrage, associate vice chancellor for alumni relations, at 217-206-6058 or cschr1@uis.edu.