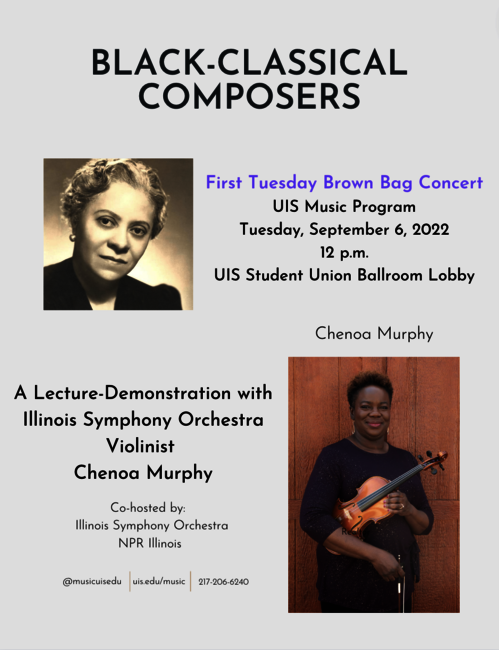 The University of Illinois Music Program presents "Black Classical Composers: A Lecture-Demonstration With Violinist Chenoa Murphy" as part of its First Tuesday Brown Bag Concert Series. The event will take place on Tuesday, September 06, 12pm in the Student Union Ballroom Lobby. It is Free and open to the public.

During this event, Ms. Murphy will discuss and perform selections of works by composers like Florence Price whose significant contributions to the classical music repertoire are often overlooked. Ms. Murphy is the founder of Introduction to Black Classical Composers and Musicians and Black Classical Musicians: The Journey Onward, online courses that highlight the contributions and achievements of classical music composers of African descent. She is also a violinist with the Illinois Symphony Orchestra and a number of other local and regional professional orchestras. This event is co-hosted by the Illinois Symphony Orchestra and by NPR Illinois. It is part of the Partnership in Education and Civic Engagement between the UIS Music Program and the Illinois Symphony Orchestra.

Chenoa Murphy was born and raised in Memphis, TN. At the age of two, Chenoa attended her first classical music concert given by Japanese violin students of Dr. Shinichi Suzuki. This sparked her interest in music and she was enrolled in the Suzuki Violin Program a year later.Demonstrating her love and enthusiasm for music, Chenoa continued to develop her natural ability and trained gift in violin and vocal studies throughout her childhood and teenage years. She attended the Overton High School of Performing Arts, summer music camps such as Aspen Music Festival, Interlochen Arts Camp, Sewanee Music Center, and the Governor’s School of Performing Arts. She has achieved both Bachelor of Music and Master of Music degrees in Violin Performance from the University of Cincinnati College-Conservatory of Music. She pursued doctoral studies at the University of Iowa under the guidance of Katherine Wolfe. Her principal teachers during these earlier and formal years of study were Yuko Honda, Pak-Chung Cheng, Katherine Wolfe, Kurt Sassmannshaus, Dorothy Delay, and Dr. Won-Bin Yim.

Besides being a former violin and viola private teacher, Chenoa is also a highly sought-after educator, guest lecturer and Diversity, Equity, and Inclusion facilitator for various music organizations and college campuses. Her online courses: Introduction to Black Classical Composers and Musicians and Black Classical Musicians: The Journey Onward highlight the contributions and achievements of classical music composers of African descent. Her article “Black Representation in Classical Music Matters” was featured in the Summer 2020 edition of the American Suzuki Journal.

Currently, Chenoa resides in Springfield, IL where she is the member of the Illinois Symphony Orchestra and is a mother of two beautiful children, Victoria, and Jonathan. Chenoa has been interviewed by CNN, NPR Illinois, and Huffington Post. Her podcast, “Black, White & In Color,” is on platforms such as Apple, iTunes, Spotify and Anchor.