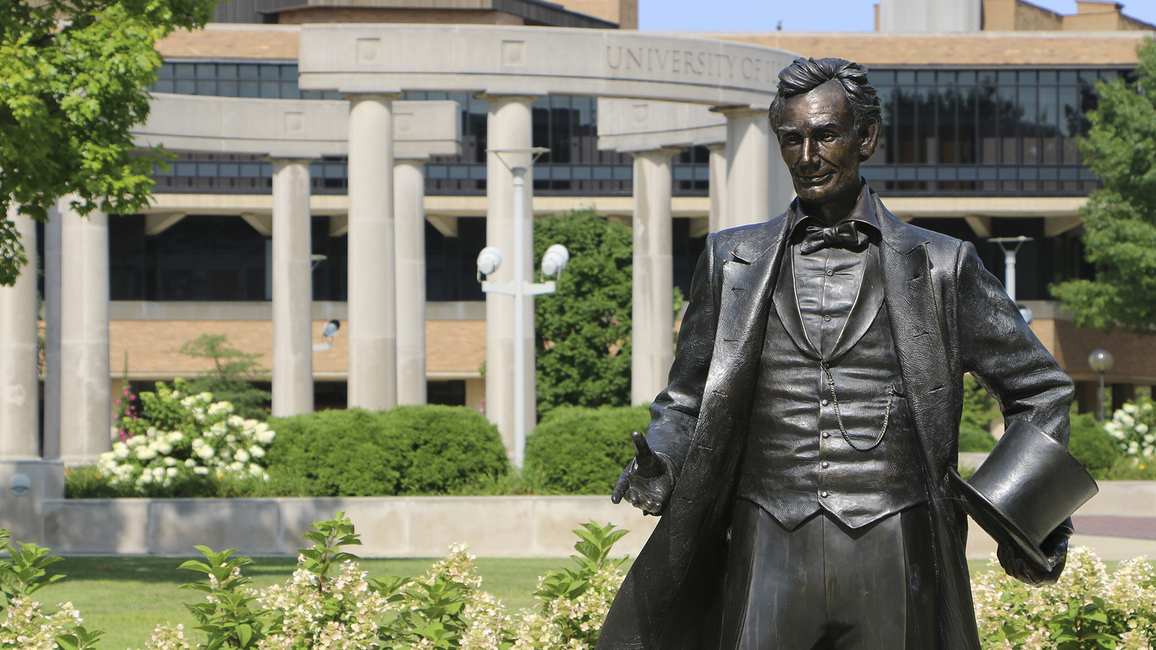 The University of Illinois Springfield Center for Lincoln Studies will hold a workshop for K-12 social studies educators on “Lincoln, Antislavery, and Antiracism,” a premier of the film “Lincoln & Douglas: Touring Illinois in Turbulent Times” and the 2021 Mary and James Beaumont Endowed Lincoln Legacy Lecture Series discussion on “Lincoln and Anti-Racism” on Saturday, Oct. 16, 2021.

The Center will invite up to 20 K-12 social studies teachers and preservice educators to participate in the first annual in-person Lincoln Legacy Lecture workshop starting at 10:30 a.m. Saturday, Oct. 16. Teachers will participate in up to five sessions during the day-long professional development event on the UIS campus. Three sessions will also be open to the general public. In the teaching sessions, master teachers and a Lincoln scholar will present materials and perspectives on Lincoln, race and slavery. The participants will then collaborate to develop their own lesson on Lincoln, race and slavery. In the last three sessions, the subjects will be examined further using film, living history and recent pathbreaking scholarship. Teachers who attend can earn CPDU credit hours. Learn more and register at go.uis.edu/TeacherWorkshop.

The public is invited to attend the virtual film premiere of “Lincoln & Douglas: Touring Illinois in Turbulent Times,” a 47-minute documentary road film about the Lincoln-Douglas debates co-directed by UIS Wepner Distinguished Professor of Lincoln Studies Graham Peck, from 1:30-2:45 p.m. Saturday, Oct. 16. The premier and discussion will take place via Zoom webinar. Participants are encouraged to register for the event at go.uis.edu/FilmPremiere in order to receive the Zoom link.

Graham Peck co-directed the film with Nathan Peck, associate professor of digital art at St. Xavier University, during the tumultuous COVID-19 summer of 2020. The film features five Lincoln or Douglas reenactors and several interviews, including an interview with a Black Lives Matter (BLM) activist in Springfield who successfully urged removal of Douglas’ statue from the grounds of the Illinois State Capitol.

After the film premiere there will be a panel discussion with the creators and contributors to the film, featuring Graham Peck and Nathan Peck. Other panelists include Sunshine Clemons, co-founder of Black Lives Matter Springfield; Kathryn Harris, retired from the ALPLM and active in many community organizations; and Randy Duncan, an Abraham Lincoln portrayer for more than 20 years.

The public is also invited to attend the 2021 Mary and James Beaumont Endowed Lincoln Legacy Lecture Series discussion on “Lincoln and Anti-Racism” with professors David Reynolds and James Oakes from 6-9 p.m. Saturday, Oct. 16 via Zoom webinar. Participants are encouraged to register for the event at go.uis.edu/BELLLS in order to receive the Zoom link.

Reynolds and Oakes will discuss the long and turning path to the abolition of American slavery that has often been attributed to the equivocations and inconsistencies of antislavery leaders, including Lincoln himself. Michael Burlingame, holder of the Chancellor Naomi B. Lynn Distinguished Chair in Lincoln Studies at UIS, will moderate and provide an overview. This topic is not only timely in our national discussion, but also provides a historical perspective on freedom, race, and emancipation in Lincoln’s time.

David S. Reynolds is the author or editor of sixteen books, most recently “Abe: Abraham Lincoln in His Times” (2020), which was selected as one of the Top Ten Books of the Year by the Wall Street Journal and among the best books of the year by the Washington Post, the Christian Science Monitor, and Kirkus Reviews. His previous books include “Lincoln's Selected Writings,” “Mightier Than the Sword: Uncle Tom’s Cabin and the Battle for America,” “Walt Whitman’s America,” “John Brown, Abolitionist,” “Waking Giant: America in the Age of Jackson” and “Beneath the American Renaissance.” Three of his books have been listed among the New York Times’s “Notable Books of the Year,” and one has been chosen among the New Yorker’s “Favorite Books of the Year.” He has been interviewed more than 100 times on radio and TV, on shows including NPR’s Morning Edition, Fresh Air, Weekend Edition and The Diane Rehm Show, ABC’s The John Batchelor Show, and C-SPAN’s After Words, Brian Lamb’s Book Notes and Book TV. He is a regular contributor to The New York Times Book Review, the New York Review of Books, and the Wall Street Journal, and is included in Who’s Who in America, Who’s Who in American Education and Who’s Who in the World.

James Oakes, one of the leading historians of nineteenth-century America, has an international reputation for path-breaking scholarship. In a series of influential books and essays, he tackled the history of the United States from the Revolution through the Civil War. His early work focused on the South, examining slavery as an economic and social system that shaped Southern life. His pioneering books include “The Ruling Race” (1982; 2nd ed., 1998), “Slavery and Freedom: An Interpretation of the Old South” (1990), “The Radical and the Republican: Frederick Douglass, Abraham Lincoln, and the Triumph of Antislavery Politics” (2007) and his latest, “Freedom National: The Destruction of Slavery in the United States, 1861–1865”(2012). The latter two garnered, respectively, the 2008 and 2013 Gilder Lehrman Lincoln Prize, an annual award for the finest scholarly work in English on Abraham Lincoln or the American Civil War era. His most recent book is “The Crooked Path to Abolition: Abraham Lincoln and the Antislavery Constitution,” published by W. W. Norton in January 2021.

The UIS Lincoln Legacy Lecture Series was inaugurated in 2002. It is now known as the Mary and James Beaumont Endowed Lincoln Legacy Lecture Series after a generous gift by Mary and James Beaumont. The UIS Center for Lincoln Studies is a national base for scholarship, teaching and public history about Lincoln’s life, leadership and legacy, and gives students an opportunity to collaborate with Lincoln scholars on research, history and public policy projects.

For more information, contact Anne Moseley, acting director of the UIS Center for Lincoln Studies, at 217-206-8663 or asutt4@uis.edu.