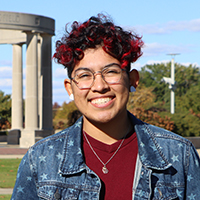 Sarah Porcayo is the chair of the Green Fee Committee, which each semester funds new projects to make the University of Illinois Springfield campus a more sustainable environment. She chose UIS “because of the small campus appeal as well as the opportunities that would be available to me to get to know my professors,” she said. “I did not want to be lost in a massive campus, but I’m still part of the University of Illinois System at UIS.” She most enjoys the “type of unity you feel” from attending a smaller campus, such as UIS. Following graduation from UIS, she plans to work at a veterinary clinic or a wildlife rehab center.