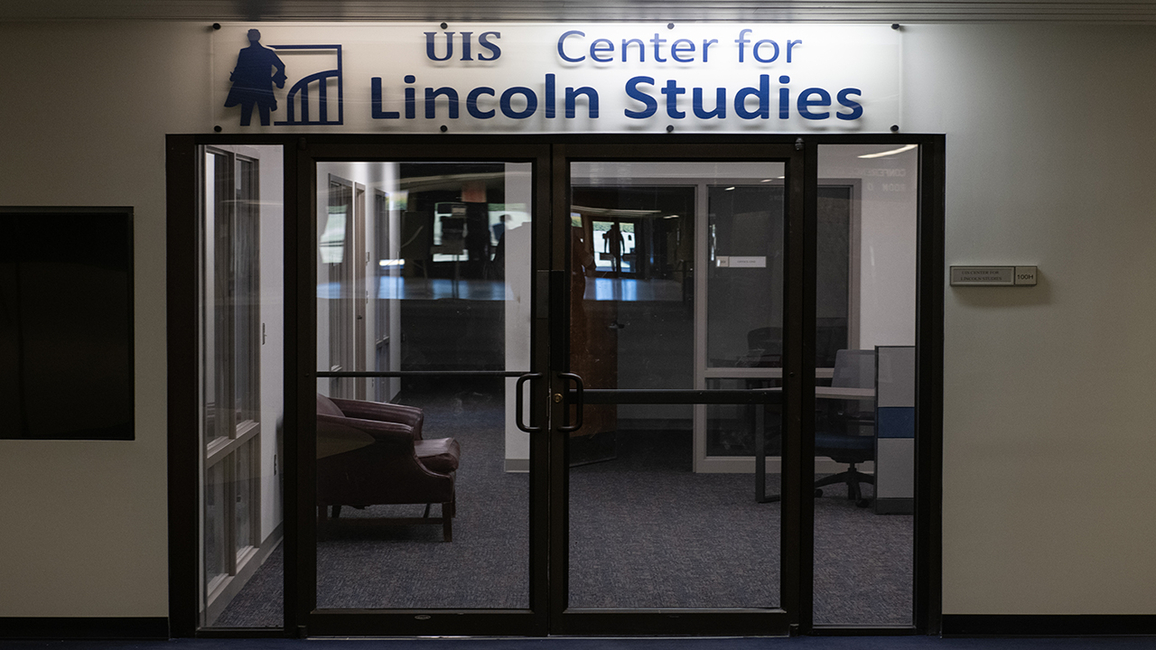 The Center for Lincoln Studies at the University of Illinois Springfield has been busy since officially opening its doors just a few months ago.

The Center is one of the five priorities of Reaching Stellar. The fundraising campaign, which hit its $40 million overall goal in August, continues until June 2022 as it raises funds to enhance the excellent opportunities the University offers its students, faculty, staff and larger Springfield-area community.

UIS virtually cut the ribbon on the Center on Feb. 12, 2021 – the anniversary of Abraham Lincoln’s birth – and has been quickly cementing its place as a national base for scholarship, teaching and public history about Lincoln’s life, leadership and legacy.

You only have to look at Oct. 16 to realize the Center is living up to its promise to provide opportunities to better understand the nation’s 16th president.

The day started with the inaugural Lincoln Lecture Workshop, which offered area educators a chance to learn how to better teach Lincoln to their students. The workshop welcomed about a dozen K-12 social studies teachers and UIS education students to a daylong professional development event where the focus was Lincoln, Antislavery, and Antiracism. The hope for future years is to expand the program and focus on Illinois teachers, according to Anne Moseley, acting director of the Center for Lincoln Studies.

In the afternoon was the film premiere of “Lincoln & Douglas: Touring Illinois in Tumultuous Times,” a 47-minute documentary road film about the Lincoln-Douglas debates co-directed by Graham Peck, the UIS Wepner Distinguished Professor of Lincoln Studies. After the film was a presentation by Lincoln re-enactor Randy Duncan, which focused on the days, events and people connected with the Lakota Indian uprising in Minnesota.

The day ended with the annual Mary and James Beaumont Endowed Lincoln Legacy Lecture Series, which for 2021 was a discussion on “Lincoln and Anti-Racism” with professors David Reynolds and James Oakes. At least 200 people registered for the lecture, which was switched to a virtual format for the year to be safe during the pandemic. The lecture will be released around the holidays, and Peck’s film will be released online in about a month, according to Moseley.

And that was just one day of events.

“I’m always encouraging people to check out our social media and blogs to see what’s going on,” Moseley said. “There is always a lot of work being done behind the scenes.”

Both Moseley and Peck are working on separate books and there are more programs to come, including the Oct. 20 virtual book discussion where Jonathan White will discuss his book, “To Address You As My Friend: African Americans' Letters to Abraham Lincoln.”

The “Making Our History: Artists Render Lincoln’s Legacy” is going well too. Artists were selected from Illinois to take part in the residency during the 2021-2022 academic year, which has an overall goal to create art that stimulates conversation about the American past. That work will then be exhibited from August to September 2022 in the Visual Arts Gallery at UIS, the Abraham Lincoln Presidential Library in Springfield, and the Springfield Art Association.

“They are hard at work coming up with their artists pieces,” Moseley said. “We are looking forward to the new creations they will present to us.”

Learn more about the Center for Lincoln Studies and upcoming events by visiting www.uis.edu/cfls/.