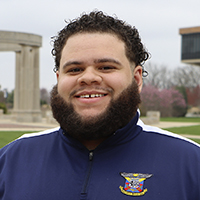 Jordan Matthews recently earned his bachelor’s degree in psychology from the University of Illinois Springfield and is now pursuing a master’s degree in Human Development Counseling. On campus, he has worked as a resident assistant and has been a part of the Delta Kappa Epsilon fraternity, Necessary Steps Mentoring Program and InQueery. “My favorite thing about UIS is the growth and acceptance of diversity on campus,” he said. “Ranging from support of racial identities to educating the community on the newest laws in regards to human rights.” After earning his master’s degree at UIS, he would like to work as a clinical psychologist for the Illinois Department of Corrections. He is also considering earning a doctorate degree.