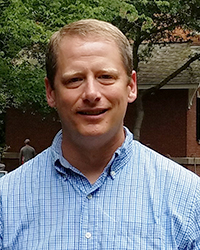 “I have had two combat deployments with the Illinois National Guard since graduation in 2001. The first was to Kuwait in 2002 and second was to Afghanistan in 2008-2009. I was awarded a Bronze Star Medal in 2009 for combat service in Afghanistan. I responded to Hurricane Katrina relief efforts with the Illinois National Guard in 2005. I deployed for additional Army training to Base Camp Stevenson, Guyana in 2004, to Managua, Nicaragua in 2007, and to Puerto Barrios, Guatemala in 2010. I graduated from the U.S. Army Flight Surgeon training program in 2008 prior to my last combat deployment and have accumulated (so far) over 400 hours of cumulative flight time in the Chinook and Blackhawk helicopters. I served as a volunteer firefighter/paramedic with the Riverton, IL Fire Department from 2004-2011; and was awarded a lifesaving medal by the department in 2006. I continue community service as an appointee to the Logan County Veteran’s Burial Assistance Commission and a member of the Human Rights and Behavioral Health Committee at Brother James Court in Springfield. I was the guest speaker at the 1st Annual Healthcare Conference in Kabul, Afghanistan, as an invitee of the U.S. Embassy in 2009. I have been a contributor to two professional publications: US Army Aeromedical Protocols, republished in 2014 and “Managing Type 2 Diabetes in Primary Care: A Quality Improvement Program.” 2008. The Illinois Academy of Family Physicians.”

“Dr. Bill Bloemer’s Physical Chemistry class was certainly a highlight my senior year. I also fondly remember Dr. Nada Chang’s as an excellent professor and mentor to me as I was preparing to enter my medical training. Drs. Keenan Dungey and Gary Trammell were also very helpful in preparing me academically. I was able to make a few active lifetime friendships with classmates and professors alike while a student there.”

“The relatively small class sizes and professor availability helped set me up for further success academically. The professors instilled and reinforced important life lessons such as accountability, perseverance, and personal responsibility that continue to prove useful to me in my life and professional career.”

“I taught myself to play guitar while a student at Chicago Medical School and stay very busy running after 3 children and 4 step children and all of their activities. I am also an avid hunter and advocate for wildlife habitat conservation.”