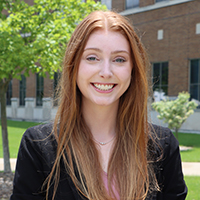 Hayley Payne says she chose the University of Illinois Springfield because “the smaller class sizes allow you to form a personal relationship with your classmates and professors.” She also liked the on-campus job opportunities. Payne is president for Dance Marathon at UIS and works as a social media content creator for UIS Public Relations. She previously served as editor-in-chief of the UIS school newspaper, The Journal. Asked what she likes the most about UIS, Payne says she likes “the variety of student events, especially Springfest, because there's always something to do on-campus!” Following graduation, she plans to apply for graduate school at UIS.