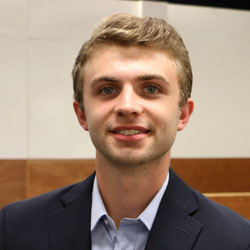 Garrett Nimmo enjoys being a voice for his fellow students. He was recently elected president of the University of Illinois Springfield Student Government Association (SGA) in a campus-wide race. As SGA president, Nimmo meets with university leaders to express student positions on important issues. He was first elected to the SGA as a senator-at-large his freshman year. Nimmo is also a mentor for Leadership for Life, a service and leadership program where students complete 40 hours of service each semester. As part of Leadership for Life, he traveled to Baton Rouge, Louisiana to clean up flood damage in 2016. He also went on the 2017 Alternative Spring Break trip and helped with outdoor eco-restoration projects. Following graduation from UIS, Nimmo would like to attend law school and become a public servant or tax lawyer.