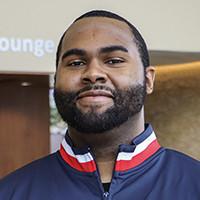 DeJoie Simmons is the Student Government Association treasurer, Student Organization Funding Association (SOFA) chair and president of the Military and Veterans Club at the University of Illinois Springfield. He is currently serving his country as a second lieutenant in the Illinois Army National Guard’s 1844th Transportation Company. He also works as a UIS Graduate Public Service Program intern at the Illinois Department of Public Health in the Center for Rural Health. At UIS, he is a member of the Lambda Pi Eta (National Communication Honor Society), the Phi Alpha Delta Pre-Law Fraternity and the National Society of Leadership and Success (Sigma Alpha Pi). “I chose UIS because it has one of the best Public Administration programs in the state,” he said. “I like how (UIS is) a mid-size school. It's not too big where I can get lost, but it's not too small either.” Following graduation with his master’s degree, he plans to earn a doctorate degree.