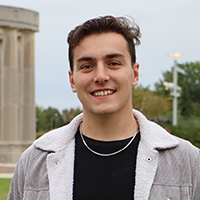 Austin Verthein is the elected UIS student representative serving on the University of Illinois Board of Trustees. He’s also an announcer for the men’s and women’s soccer games and a member of the Phi Alpha Delta Pre-Law Fraternity and the Investment Club. “I chose UIS because of its proximity to home, the beautiful campus and its affordability,” he said. Verthein said he’s made friends and memories at UIS that he’ll remember for the rest of his life. Following graduation from UIS, he plans to attend law school, specializing in criminal law.