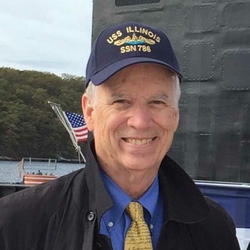 Michael Burlingame, a graduate of Princeton and Johns Hopkins and holder of the Chancellor Naomi B. Lynn Distinguished Chair in Lincoln Studies at UIS), has written and edited twenty Lincoln books, among them Abraham Lincoln: A Life (2 vols.; Baltimore: Johns Hopkins University Press, 2008), a 2000-page biography which won several prizes and was designated one of the five best books of the year by The Atlantic. Writing about that work in The New York Review of Books, James McPherson, the dean of Civil War scholars, said Burlingame “knows more about Abraham Lincoln than any other living person.” Professor Burlingame’s most recent books are An American Marriage: The Untold Story of Abraham Lincoln and Mary Todd and The Black Man’s President: Abraham Lincoln, African Americans, and the Pursuit of Racial Equality (both published by Pegasus Books of New York in 2021. He is currently president of the Abraham Lincoln Association, based in Springfield.