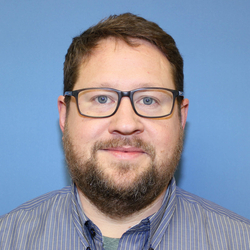 Jeff has over 20 years experience in Education Technology and started his UIS career with Information Technology Services in February 2009, after previously working with the Tuscola school district as a technology coordinator. He was originally hired as a multimedia specialist, working with faculty on audio and video files, website design, and streaming video. His responsibilities have expanded into instructional support and training for faculty, staff, and students as well as leading innovation in ITS.

Jeff has become involved in many areas of the UIS Community as he has served on the Civil Service Advisory Council, served as one of the representatives on the State Universities Retirement Member Advisory Council, earned Employee of the Month in October of 2015, nominated for the Chancellor's Award for Recognizing Excellence twice, served as the Acting Manager for the Office of Web Services, serves on the Campus Space Allocation Committee, and works with many other parts of campus to support the mission of the University.