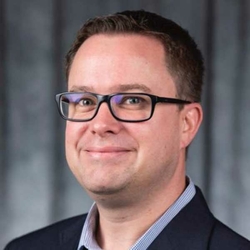 The director of the Public Affairs Reporting Program is Professor Jason R. Piscia, a 1998 PAR graduate who came to the University of Illinois Springfield following a 21-year career at The State Journal-Register (SJ-R).

After completing his PAR internship with the SJ-R, the newspaper hired him as a general assignment reporter. He also covered higher education, business and city government before becoming the newspaper’s first-ever online editor, in charge of managing the SJ-R’s website. Piscia was then promoted to digital managing editor, directing coverage and overseeing production for both the SJ-R digital and print editions.

Under his direction, the SJ-R’s website won numerous awards for excellence from the Illinois Press Association and Illinois Associated Press Media Editors.

In his role at the SJ-R, Piscia has helped to mentor and ultimately hire several Public Affairs Reporting Program alumni.

A native of Peru, Illinois, Piscia holds a bachelor’s degree in mass communication from Illinois State University, where he was a reporter and editor for the student newspaper, The Vidette.

Piscia draws on the talents of professional journalists, state officials and public policy experts to present students with a well-rounded program to bridge academic and professional elements of the program.