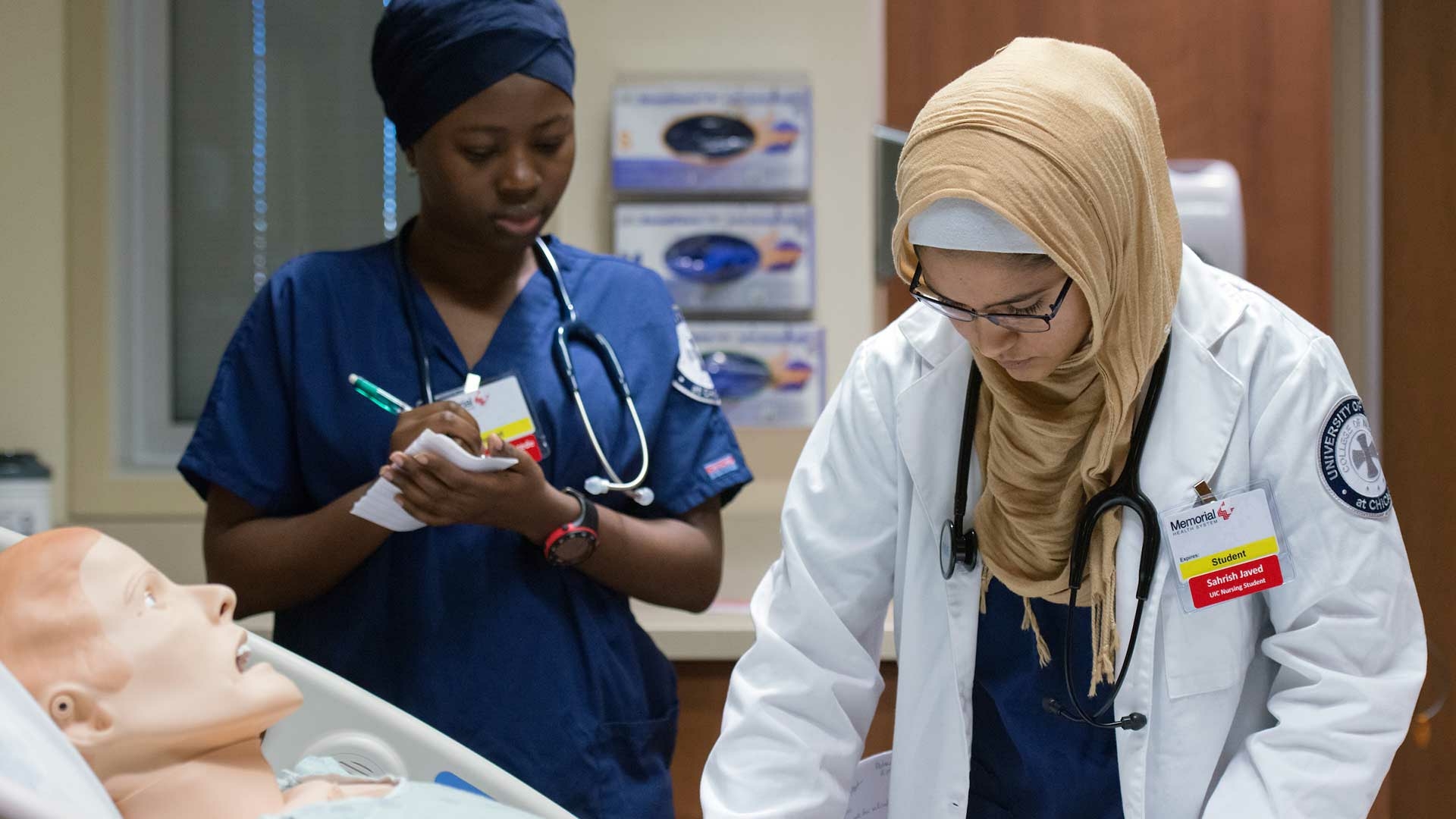 The University of Illinois at Chicago’s College of Nursing offers prospective students in the central Illinois region an opportunity to earn a Bachelor of Science in Nursing (BSN) degree on the Springfield campus.

Students benefit from access to the nationally ranked UIC College of Nursing education while studying and living in Springfield. A growing health industry is the number one employer in Springfield and nationally recognized regional medical centers serve thousands in central Illinois. Nursing students learn in UIS classrooms and in the cutting-edge facilities located at area hospitals, including the new clinical simulation center for nursing at Memorial Medical Center in Springfield.

Students who successfully complete the first-phase pre-nursing coursework and are admitted to the UIC College of Nursing, complete the nursing curriculum, which includes clinical rotations in professional settings.

The goals of the UIC-UIS partnership are to increase the opportunities for students interested in a nursing career, and to increase the pool of highly-qualified, baccalaureate-prepared nurses to address a critical shortage in this region and beyond.

The mission of the UIC College of Nursing is to transform health, healthcare, and policy through knowledge generation and translation, and education of future leaders from diverse backgrounds.

Our vision is to be a preeminent leader in advancing global health and nursing.

In 1951, the Board of Trustees for the University of Illinois authorized the organization of the School of Nursing to be an autonomous unit of the university. The Affiliate Collegiate program was discontinued and the University of Illinois at Chicago (UIC) became the first public institution in Illinois to offer a curriculum leading to a Bachelor of Science degree in Nursing. The result attracted students that might have otherwise have forgone nursing. The admission of the first class to the School of Nursing in September, 1954 marked a defining moment in the history of nursing at the UIC.

In 1956, Emily C. Cardew became the institution’s first dean of nursing and the first class of eight students graduated in 1957. Soon after, re-designated as a College of Nursing (CON), the UIC established a Master of Science in Nursing.  In the late 1960s, construction of a new building at 845 South Damen Avenue was completed. This new facility allowed the number of incoming students to triple. In the 1970s, the CON expanded to include regional sites in Peoria, Rockford and Urbana; established the first PhD program for nurses in Illinois; and created the first ever graduate program of its kind in nurse midwifery in the U.S. The CON expanded to the Quad Cities in 1980. In 1986, it was designated as the first World Health Organization (WHO) Collaborating Centre in Nursing and Midwifery.

The 1980s and 1990s witnessed the CON emerging as a leader in nursing research with numerous federal and state funded grants. These research endeavors, along with the highest quality of education and patient care, have brought national recognition to the UIC College of Nursing.  It is one of the premiere nursing programs in the nation. In 2005, the CON celebrated its 50th anniversary at the Adler Planetarium in Chicago – a fitting location for a college that continues to reach for the stars.  Although we are long past that anniversary, we will always be reaching/striving for the best.

The UIC College of Nursing draws the most accomplished and proactive nursing students from across the nation and around the world and continually exceeds expectations with our number of graduates.  Besides its Chicago campus, the college has five regional campuses in Illinois – Peoria, Quad Cities, Rockford, Springfield and Urbana – and an internationally recognized and vibrant Global Health Leadership Office (GHLO).

The University defines diversity as, “the totality of the ways people are similar and different, including race, ethnicity, class, gender, sexual orientation and identity, disability, national origin and citizenship status, age, language, culture, religion, and economic status, particularly when those similarities and differences are used as a basis for unfair advantage and inequity.”  The goals in this document are based on multiple sources of data including the College of Nursing Diversity Strategic Thinking document and the University document, “Through the Lens of Diversity.”  Download ‘CON Diversity Strategic Plan’ (pdf).

A Mosaic for UIC Transformation

Through the Lens of Diversity

This report shares with the UIC community the conclusions and recommendations for action of the Diversity Strategic Thinking and Planning (DSTP) Committee. Download ‘Through the Lens of Diversity’ (pdf).

The University of Illinois at Chicago is accredited by the Higher Learning Commission (HLC) of the North Central Association of Colleges and Schools (NCA).

The College Baccalaureate and Graduate Entry programs are also approved by the Illinois Department of Financial and Professional Regulation (IDFPR).  The Nurse-Midwifery program is accredited by the Accreditation Commission for Midwifery Education (ACME) through January, 2022.

The College of Nursing holds membership in the American Association of Colleges of Nursing (AACN).