Meet the Division of Advancement Staff 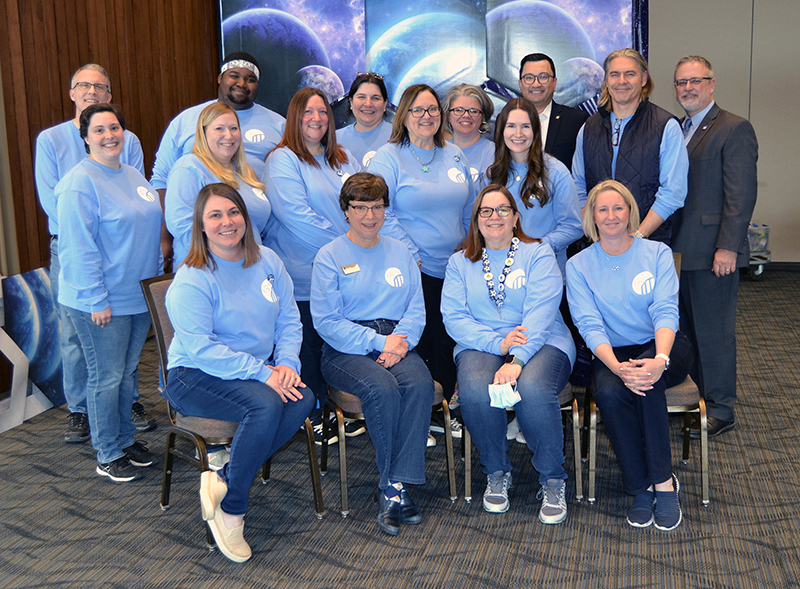 The Division of Advancement encourages and administers private gifts to support the  University. As we continue to pursue our most ambitious campaign to date in support of our students, faculty and programs, we create opportunities for our donors, alumni and friends to support our Prairie Stars. Our core values include quality, professionalism, service, integrity, caring and unity. Please take a minute to meet our staff.

Jeff leads the fundraising and alumni engagement functions at UIS. He has been with the university since 2012 and is directing UIS’ $40 million Reaching Stellar Campaign. He received the Outstanding Professional Fundraiser Award from the Capital Area Chapter (IL) of the Association of Fundraising Professionals in 2014.

Having an impassioned belief in the transformative power of higher education, Chuck has worked at the University for 28 years, and began his tenure with the Division of Advancement in 2015. He has specialized in alumni engagement strategy, volunteer management, program management and university relations for a majority of his career; and is experienced with overall university operations and procedures. Chuck earned a master's degree in political science from UIS, and earned his bachelor's degree from MacMurray College. In his personal time, Chuck loves to exercise and experience world travel, passions which he shares with his wife and daughter.

Lisa Whelpley is the UIS Associate Vice Chancellor for Development at UIS. She oversees the strategic design, collaboration, management and implementation of all alumni/donor mass communications and solicitations conducted by mail, phone, electronic and other means for the university. Lisa manages UIS’ successful Faculty and Staff Campaign each year. She earned a master's degree from the University of Illinois and her bachelor's degrees from Miami University. Before starting at UIS in 2001, Lisa worked in nonprofit fundraising at the Central Illinois Foodbank and the Illinois 4-H Foundation.

Teresa has more than 26-plus years of fundraising experience in the areas of donor and gift stewardship, prospect research, event planning, policy development, budget oversight, capital campaigns, scholarship selection procedures, and donor and alumni database conversion. Teresa currently oversees the business operations of the UIS Office of Advancement. Before starting at UIS in 2000, she was the Director of Research and Records for Alumni and Development at Millikin University in Decatur. She holds a bachelor’s degree from SIU Carbondale and a master’s from UIS in health services administration.

Jen joined UIS in June 2021 as a Director of Development, focusing on Corporate and Foundation Relations and alumni and donor engagement in the Western region of the United States. She has spent her entire 22-year career connecting donors with causes they care about, working with them to make a lasting impact and experience the joy of giving. Jen received her master’s degree in interpersonal and organizational communication from the University of Illinois Springfield, where she also participated in the Graduate Public Service Internship (GPSI) Program. Originally from Quincy, Illinois, she received a bachelor’s degree in business management with a minor in public relations from Quincy University. In addition, Jen holds the designation of certified fundraising executive.

Pam earned a bachelor's degree in political science at the University of Illinois Urbana Champaign. Pam has more than 20 years of experience in fundraising with several Central Illinois nonprofits, including Carle Center for Philanthropy and United Way of Champaign County. She is additionally pursing her MPA at UIS. Pam has the education and experience, but most importantly the passion, to do great things and impact people’s lives.

Terri Hempstead
Director of Development
Major gift officer for the College of Public Affairs and Administration, NPR Illinois, the UIS library, and donors in the Eastern and Northeastern states
217.206.6059; themp2@uis.edu

Katie Champion Williams
Director of Development
Major gift officer for the College of Business and Management; and Corporate and Foundation Fundraising
217.206.7389; kwill50@uis.edu

Katie earned a bachelor's degree in communications studies at Indiana State University in the early 2000s. Katie is currently pursuing her master’s degree in communication at UIS and looks forward to the completion of the program so she can also be a proud alumna of UIS. Prior to coming to the University of Illinois Springfield, she spent most of her career fundraising and doing education outreach with the American Cancer Society. Katie shares her passion for higher education and UIS to cultivate philanthropic relationships with alumni and friends of the university, both locally and throughout the greater Midwest.

Courtney joined the UIS Division of Advancement in 2021 as a Prospect Development and Segmentation Analyst. Previously, she worked at the University of Illinois Foundation. She obtained her bachelor's and master's degrees from Southern Illinois University Edwardsville. While in college, she discovered the world of fundraising (more specifically Dance Marathon, benefitting local Children’s Miracle Network Hospitals) and her passion for the field of development was ignited. When not spending time with her husband and young son, Courtney is an avid kindle reader, podcast listener, and quilter.

Scott joined the UIS Division of Advancement in August 2022 as the Stewardship and Donor Relations Program Coordinator.  Previously, Scott worked in the public and private sectors in both Springfield and Chicago.  Scott earned a bachelor’s and master’s degree in political studies from the University of Illinois Springfield before earning his MPA at UIS.  This education fueled his passion to stewardship and working towards making a positive change in his community.  Outside of work Scott enjoys biking, golfing, traveling, and spending time with family and friends.

Ashley joined the UIS Division of Advancement in September 2022 as a Marketing Associate. She is responsible for developing and implementing marketing and communication tactics that enhance fundraising and alumni relation efforts. Ashley earned a bachelor's degree in agricultural communications from the University of Illinois Urbana-Champaign. Prior to coming to UIS, Ashley developed marketing and fundraising strategies for multiple organizations, including Central Illinois Foodbank and The Greater Springfield Chamber of Commerce.

Nicole is responsible for coordination of the activities of the Vice Chancellor/Senior Vice President and the UIS Division of Advancement including programs, policies and procedures of both the University of Illinois Springfield and the University of Illinois Foundation. Nicole assists in budget development and coordinating fiscal operations within the unit, manages personnel functions of the office, as well as work flow and records management. Nicole served in the United States Air Force and has worked in public service since 2009. In 2021, she received her Master of Public Administration from University of Illinois Springfield. Nicole enjoys spending time with her spouse and three children, reading, sewing, and needlepoint.

Chris graduated from UIS in 1995 with a bachelor's degree in English, where he enjoyed his time at the university and had some great professors. He has worked in customer service and information technology for several local businesses. He enjoys reading, running, movies and football, and is also active with his church and volunteers as with CASA as a court appointed special advocate for Sangamon County. He has never worked in development and advancement before, and is looking forward to learning more about the field, and is excited to be a part of the advancement team.

Courtney earned a master's degree from Northwestern University’s Medill School of Journalism and a bachelor's degree in communication arts from Hamline University in Minnesota. Before joining the Illinois Innocence Project in 2014, she spent her career as a grant writer for various nonprofits and a corporate communication consultant for an international firm in Chicago. Courtney oversees all advancement activities for the Illinois Innocence Project, including fundraising, donor relations and communications, event planning and grant writing, and also assists in the administrative management of the organization.

Randy grew up in the south suburbs of Chicago and graduated from North Central College in Naperville with a degree in speech communication/theatre. He has worked at several radio stations, including long stints at WGN in Chicago and KTAR in Phoenix. He is thrilled to be a part of NPR Illinois’ efforts to enhance the Central Illinois community.

Kate is the director of development for NPR Illinois. She has worked in the Division of Advancement since December 2019, first doing marketing and communication for the office before switching over to NPR. Prior to joining UIS, Kate spent more than 16 years as a journalist, working in various reporter and editor roles at newspapers in Illinois, Indiana, Minnesota and Wisconsin. Her beats over the years included K-12 education, higher education, government and courts, as well as serving as the opinion page editor for the state capitol newspaper in Illinois. She enjoys spending time with her husband, toddler son and two stepsons. Kate earned a master's degree in public affairs reporting from the University of Illinois Springfield and her bachelor's degree in mass communication – journalism from Winona State University in Minnesota.

Sarah joined UIS in October 2021 as Director of Development for the Performing Arts Center. Before moving to Illinois, she spent more than 11 years as a professor of Theatre Arts and most recently worked with the YMCA of Springfield. Sarah earned her MFA from Western Illinois University and has a background in grant writing, nonprofit fundraising and event planning. She is a proud FRIEND of the UIS Performing Arts Center and excited to build relationships with other individuals who share her passion for performing arts.