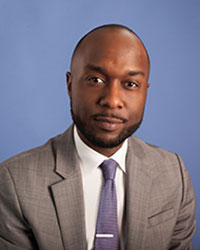 “After graduating from Alabama State University in 2010, I was selected as a Fellow with the Governor’s Office of Constituent Affairs (GOCA). Since that time I’ve gone on to personally lead capital campaigns that have raised $12 million, and in 2017 was hired as the new director of the statewide LGBT Chamber of Commerce of Illinois. In 2018, I was nominated to “50 Under 50″ by Alabama State University.”

“Hanging at the nearby lake with friends and long winter nights in the library working on my research capstone.”

“Attending UIS and being a student in the MPA program exposed me to a diverse group of students and community leaders who are champions of change. Being able to make connections and build relationships with other alumni in nonprofit and government sectors has been helpful in advancing issues or overcoming obstacles in many situations. Through UIS, I have gained lifelong mentors, friends, and peers who will support me in my professional journey.”

“I have a greeting card business called JR Holston Greetings, which has two card lines: Ophelia and Hey Honey.”