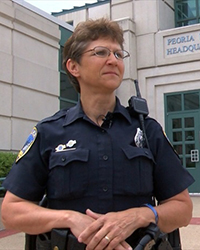 “I was the first female Police Officer of the year in the Peoria Police Department. I retired from the Peoria Police Department in 2018, but am proud of the 23 and a half years I spent serving the community. The last eight years on the force, I worked as a patrol officer in the East Bluff Community. Each year, I grow a garden and have always taken my produce to families that need it. I helped with Shop with a Cop each year at Wal-Mart. I’ve also have been a member of the Special Olympics since 1989, serving on the State Committee for the Illinois Law Enforcement Torch Run in 2003. I continue to assist with various Special Olympics fundraisers to help athletes participate with their year-round training and events.”

“I was Vice-President of the Student Senate which helped the University transition from Sangamon State University to the University of Illinois Springfield. I came to UIS on a tennis scholarship and was a member of the team that went to the NAIA National Tournament and was named MVP. My sophomore year, I switched to volleyball and was recognized with sportsmanship awards and as a co-MVP of that team. I was a student worker and president of the Criminal Justice Club. I participated in an internship with the Springfield Police Department and Illinois State Police. After graduation, I stayed in contact with my professors and other staff members. After receiving my master’s degree, I was asked to teach part-time at the UIS Peoria Campus. The reward of receiving a degree from UIS and being able to give back to my UIS family has been priceless.”

“The classes and extracurricular activities at UIS prepared me to give back and pay it forward. My college days were some of the best days of my life. I learned how to grow academically, personally and become a better person in preparation for my anticipated profession as a police officer. UIS was my playground that allowed me the opportunity to find my true passion. UIS provided diversity that has been used throughout most of my adult life. I learned to network, which has helped me in my future because you never know who or what you might need in a current situation. The UIS education provided me the ability to learn communication and people skills. In short, I learned how to use my voice.”

“I train bird dogs for hunting and competition.”