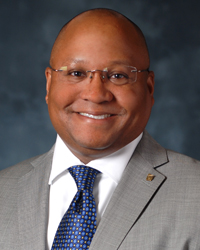 “Being able to attend the first and second Inaugurations of President Barack Obama from a professional standpoint. Also, watching President Obama’s nomination acceptance speech from the DNC Chairwoman’s suite.”

“Serving as Student Body President. It was right at the time of the transition from SSU to UIS, so there were so many exciting unknowns to deal with representing the student body. I would also say the MOST significant moment for me while at UIS was meeting my wife, Heidi Waltner-Pepper, while on campus.”

“UIS gave me the opportunity to undertake various internships in and around state government, which led to me eventually working for the Speaker of the Illinois House and then becoming a lobbyist, which I am today.”

“While one would assume that a political thriller would be my favorite movie is Wall Street with Michael Douglas and Charlie Sheen. I enjoy it because it depicts the rise of a young upstart who glorifies a high-profile person without integrity, who realizes that integrity is all a person has in the end. And the same should go for people in politics.”