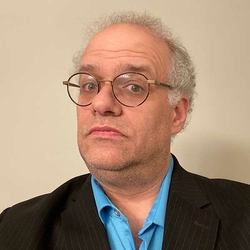 Scott Faingold is an accomplished journalist, instructor, radio personality, novelist and musician. He was raised in Springfield, Illinois and spent years doing media-based work in Chicago as well as in Houston, Texas before returning to central Illinois in 2010 to complete his M.A. in Communication at University of Illinois Springfield. He worked as a full-time staff writer for Springfield’s weekly newspaper Illinois Times (2013-2018), associate editor of Springfield Business Journal (2013-2016) and co-hosted weekly arts roundup The Scene on NPR Illinois (2015-2017). Faingold was an adjunct instructor in the UIS Communication department (2013-2018) and is now Director of Student Media and adviser for the UIS student-run newspaper/multimedia hub,The Observer  He is the author of the novel Kennel Cough as well as founder and editor-in-chief of Activator, an independent monthly magazine focusing on central Illinois music and culture. He also performs and releases original music as a member of the bands Heptanes, Splendid Flunkys, Petulant Clark and Prom King.