2019 Illinois Young Innovator of the Year 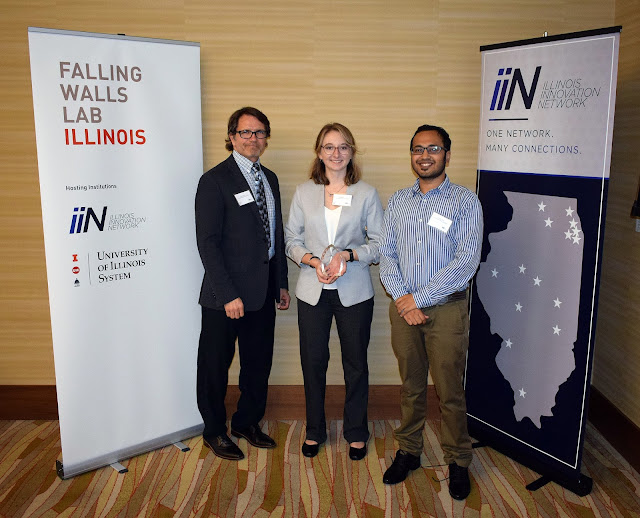 Congratulations to the recipients of Department of Chemistry awards:

The 2019 Student Technology Arts and Research Symposium included four oral presentations and three posters presented by chemistry and biochemistry majors. Congratulations to all 11 students on their hard work and quality presentations.

Congratulations to the recipients of Department of Chemistry awards:

Ian Tinsley graduated from UIS in Spring of 2015 with a Bachelor’s degree in Chemistry. He decided to pursue a Master’s degree at Eastern Illinois University where he has worked with Dr. Kraig Wheeler on molecular recognition with quasiracemic systems. He has presented his work at the American Crystallographic Association and American Chemical Society Meetings. Ian will graduate from EIU this spring and was selected for the Distinguished Graduate Student Award and the Graduate Student Investigator Award. He will carry on his studies in the PhD program at Syracuse University in Fall of 2017.

As an undergraduate student, Chemistry major and Capital Scholars Honors Program member Ashley Hollinshead is getting to do hands-on research at the University of Illinois Springfield. She was recently chosen, along with ten other UIS students, to present her research at the University of Illinois Undergraduate Research Day at the Illinois State Capitol. Her love of science has led her to apply for medical school. She’s not sure what type of doctor she wants to be yet, but she knows she’ll be working in a field she loves. Hollinshead fell in love with UIS during a campus visit in high school. “I would choose UIS again in a heartbeat,” she said.

The University of Illinois Springfield was a top choice for Daniell Bennett. Between the location, small class sizes, and opportunities for involvement and networking, she says she knew it would provide everything necessary to prepare her for medical school. Chemistry plays a large role in her everyday life. She does research on water quality at the UIS Emiquon Research Station and in 2015 she travelled to New York with two professors to contribute to their research. The exhibit, titled “The Secret World Inside You,” was displayed at the American Museum of Natural History. Bennett has also held leadership positions in the Alternative Spring Break volunteer organization.

Ashley loves to volunteer! At the University of Illinois Springfield, she’s a member of the Leadership for Life service organization, which gives back to the Springfield community. She’s also the Chemistry Club Treasurer, and a math lab tutor. She recently spent a summer interning with the U.S. Department of Energy at the Argonne National Laboratory. She chose to come to UIS because of its friendly atmosphere and small class sizes.

Accepted to a PhD program in Chemistry Fall 2014

Learn more about Ritesh and his research

Mark Frakes, a 2012 graduate in Chemistry from UIS, has been named as a James Scholar at the University of Illinois College of Medicine at Rockford.  This is an honors research program for outstanding students to expand their intellectual curiosity and pursue a research project in medicine.  Scholars are required to meet stringent application criteria and demonstrate increased academic rigor.  Completion of the James Scholar program is a significant achievement that is recognized at graduation.

Mark’s research project will attempt to further understand the properties and mechanisms of a novel anti-cancer compound, T-oligo. Previous in vitro and in vivo studies have shown t-oligo to be an effective anti-cancer compound against malignant melanoma cell lines. Currently, faculty and students with in the Medical Biotechnology(MBT) department at the Rockford campus are looking into the structure of t-oligo as well as peptides that can be used to stabilize the molecule in vivo. He will collaborate with the MBT faculty and students, including UIS Chemistry alumnus Luke Wojdyla, to further the understanding of t-oligo and its use an anti-cancer agent.

Hillary first contacted Dr. Johnson in the summer after her junior year. She knew from a previous class that his research involved venom and their potential for therapeutic drug development.

“He talked about his research often,” Hillary says. “He was very, very passionate about it, so I knew I wanted to work with him. Now I’m so glad I did.”

Dr. Johnson decided to involve Hillary on his bullet ant research. The notorious bullet ant’s painful sting causes pain comparable to being shot.  According to the Schmidt Pain Index, the bullet ant’s sting ranks as the most painful in the insect world. Hillary also worked with the venom from wasps, scorpions, and spiders.

Hillary’s work in research has sparked her to continue her education in graduate school as she hopes to further develop her skills and knowledge for pharmaceutical development.

More than a job, however, Hillary’s research with Dr. Johnson elevated her ability to lead.  “Every student has responsibilities,” she says, “but they fulfill those to reach their personal goals. Doing undergraduate research, I had to be responsible for Dr. Johnson. This was his research, and I had to be independent and responsible for his sake.  I’m a better leader because of that.”

Congratulations to the 2011 Chemistry Graduates!

Kimberly Bartosiak, a senior majoring in chemistry at UIS, has received the Student Laureate Award for 2010 from the Lincoln Academy of Illinois.

The Lincoln Academy’s Student Laureate Awards are presented for excellence in curricular and extracurricular activities to seniors from each of the four-year, degree granting colleges and universities in Illinois.

“These students have exhibited a personal commitment to excel as seen by their remarkable academic accomplishments,” said Thomas S. Johnson, Chancellor of the Lincoln Academy, who added, “They serve as role models to other Illinois students. With hard-working and dedicated young leaders such as these, Illinois and the rest of the nation can look forward to a bright future.”

Kimberly was one of 48 students to be honored in a ceremony in the Old State Capitol State Historic Site in Springfield on Nov 6. Each winner received a Student Laureate Medallion, an honorarium and a certificate of achievement. The event marked the 36th year that students have been honored by the academy.

Kimberly got involved in research as a Merck Scholar working on a collaborative project with biology and chemistry at the Emiquon Field Station and various other lakes throughout central Illinois. She presented this work at the AAAS conference and UIS Science Symposium in 2009.  Since then, she has continued in research in a Neuropharmacology lab at the Southern Illinois University Medical School, working on determining the composition of nicotinic acetylcholine receptors within a specific nucleus of the brain.  She received the Hemal Vakharia Memorial Award for this work.  She is currently focusing on determining the morphology of neurons in a region of the brainstem.

Kimberly was a two time recipient of the Avery Brundage student athlete scholarship, while she played volleyball at UIS.   Kimberly has also been involved with community service.  While at UIS she has spent time serving at St. John’s Breadline and mentored underprivileged junior-high and high school girls.  She currently volunteers regularly as a Samaritan at St. John’s Hospital.

Ms. Bartosiak is currently applying to medical schools and plans to specialize in either neurology or neurosurgery.